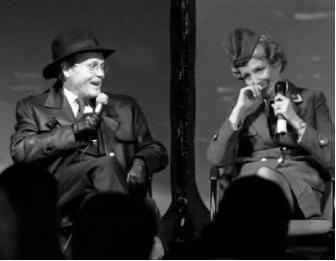 In response to 'Allo! Allo!'s enduring popularity, Richard Gibson and Kim Hartman have regularly been invited to appear at public events, including product launches, cruises, after dinner speaking and a variety of corporate occasions. They have developed a number of cabaret shows that can be tailored to any occasion, and they are now adapting their material to include Guy Siner – in character as Lieutenant Gruber.

Two of these entertainments include 25-minute sketches, with laughter, music and magic, followed by question-and-answer sessions and anecdotes around the making of the series and the artists' experiences in the entertainment world.

A further show is based around a collection of favourite video clips from Allo! Allo!, accompanied by behind-the-scenes stories relating to the selections, and a question-and-answer session. Kim, Richard and Guy can also make themselves available to be photographed in costume with members of the audience.

The cabaret shows can be tailored specifically to the particular events, with topical references to the people involved.

Kim, Guy and Richard are available for a variety of events.

They can appear in costume and in character, and can perform brief sketches,
appear for photoshoots and participate in their popular question-and-answer sessions.